Why Some Art Fairs Thrive—and Others Flop 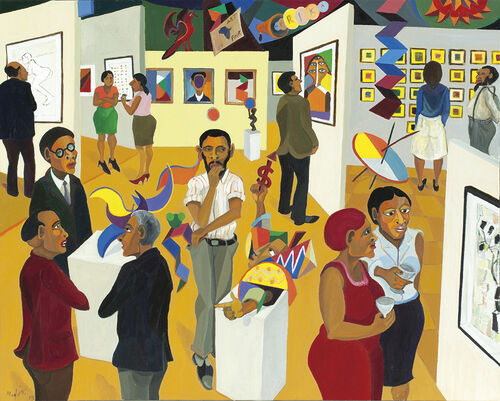 The Art Nashville fair seemed like it had everything going for it. Nashville was ranked the fourth strongest urban economy in the United States, had a promising art market, and better still, there was no significant art fair there. Dealers from all over the world signed on for the fair and made plans to enter this new market.

But the fair’s organizers, Matthew Eck and Pierre Lamoureux, have postponed it twice. Dealers have reported difficulties getting their deposits back, as well as thousands of dollars wasted on airfare, hotel rooms, and other expenses. While Eck promises the fair will happen in 2020, many in the art world remain skeptical about its future success.

But other fairs have made a go of it beyond traditional art-world hub cities, or by exploring innovative models. The Dallas Art Fair, which held its 11th edition in April, has attracted dealers from across the country and around the world who are eager to tap into Texas’s collector class. During Frieze New York in May, Object & Thing had its debut in Brooklyn, attracting over 3,000 visitors to peruse a mix of art and design objects from leading galleries. The contrasting fortunes of these very different fairs beg the question: What factors make an art fair successful?

Unsurprisingly, location is a major factor. Rick Friedman, a longtime art fair organizer who founded ArtHamptons and Jackson Hole Fine Art Fair (the latter of which had its debut in Wyoming last week), said his strategy was to be a “pioneer” in the market. For ArtHamptons, Friedman said his idea was to have “the galleries come to the money,” rather than the other way around. Instead of having collectors travel across the country or even the world, he bet collectors would turn to a fair staged in their collective backyard.

But a fair’s success depends on more than situating it where none previously existed. Friedman said he researches the potential local market, talking to collectors and gallerists to determine if a given region has the potential to sustain a successful art fair. Next year, he’ll launch the Denver Fine Art Fair. He described Denver as “an untapped market” that has a “strong collector base with young professionals who have discovered art collecting in a fast-growing metropolis.” While Friedman takes a pioneering attitude toward fairs, he said that having too many fairs in a city or region can be counterproductive because “it gets watered down.”

But plenty of art fairs have managed to be successful in cities where competition is fierce. Sometimes it’s a matter of establishing the upstart fair within a specific niche or by providing a new experience for collectors and gallerists. Object & Thing founder Abby Bangser, a former artistic director for the Frieze Art Fairs, explained that she wanted to put together a show that exhibited art and design together on equal footing. The fair presented roughly 200 art and design objects without classifying them as one or the other, “leaving that up to the viewer to make their own judgments,” Bangser said. In doing so, Object & Thing found a niche in a week already packed with art fairs like Frieze and TEFAF.

In addition to the conceptual framework for the show, Bangser said she was “interested in creating a new model for art galleries to participate in art fairs.” Unlike larger fairs, where galleries pay a fee based in part on the size and location of their booth—incurring costs that quickly reach five digits—at Object & Thing, the organizers took on the risk. The fair earned money by taking a commission fee on the objects sold. Galleries didn’t have to send staff or set up stands; they just sent the objects and the fair took on the rest.

Another measure of a fair’s success is its ability to go beyond servicing dealers and collectors, and actually give back to the local art community. FOG: Design+Art in San Francisco has tied its efforts with fundraising for the San Francisco Museum of Modern Art (SFMOMA). Stanlee Gatti, FOG’s co-founder, said that “the idea was to help bring something to San Francisco that would be interesting to the art world and benefit SFMOMA.” In its first year, the show raised $50,000 for the museum, and now brings in around $1 million through its opening night SFMOMA benefit, according to Gatti.

Successful fairs can also benefit from the strength of local cultural institutions. Tony Karman, the president and director of EXPO Chicago, whose eighth edition opens to the public on Thursday, explained that part of Chicago’s appeal to international galleries and collectors is the depth of the city’s cultural scene. He said the fair was building “on what was in place in Chicago—the world-renowned museums and institutions and the stellar list of contemporary artists who live and work here.”

Civic support, both Friedman and Karman added, plays a huge factor in the success of a fair. If the mayor’s office, local departments of cultural affairs, and other civic leaders get behind the fair, that enthusiasm helps drive support.

However, if it were only about finding the right location or niche, that wouldn’t account for Art Nashville’s struggles. Establishing credibility with gallerists and collectors is also key to the success of a fair. Karman explained that art fairs must remember to take care of the participating galleries. “All of us working for EXPO, we are in service to them,” he said, adding that fair organizers need to create an operationally smooth affair that allows galleries to focus on presenting artworks and meeting collectors.

Fairs also have to be mindful of collectors’ needs. Having a good selection of galleries, setting up invigorating programming, and even creating a pleasant environment will make a fair successful for the people attending. “When you go to the art fair, the experience should have an element of beauty from the beginning to the end,” said Gatti. That’s what brings people in and keeps them coming back, helping galleries make sales and meet new clients.

A successful art fair, then, depends on a healthy mix of factors from its location or area of focus to its structure, reputation, credibility, and amenities. Finding the right mix ensures dealers and collectors both come away satisfied.

What You Think of This Sam Gilliam Painting Reveals Your True Feelings About Donald Trump, Too, Pollsters Say

Why Some Art Fairs Thrive—and Others Flop

Big Galleries in the Windy City: Expo Chicago Welcomes a Slew of Power Dealers to the Midwest’s Biggest Fair